Data enrichment is the process of adding to or enhancing data to make it more suitable or useful for a specific purpose. Often in the field of analytics this will aid in providing more useful insights and in machine learning this may refer to enhancing the data to get a more accurate model. Data enrichment is most often the result of joining additional data from a 3rd party api or another data source. For example the data could be enriched using an internal database to look up customer data based on the user ID, or another example would be adding some information from clearbit or similar to build a more detailed picture of the customer based on their email.

The first step we will cover in this tutorial will be to populate the input topic with IP address data partitioned by country. In the next step, we will run a Bytewax dataflow (essentially a pipeline defined using Python that is used to organize operations such as “map”, “filter”, and “reduce” on streaming data to perform some transformation) that obtains location data from the IP addresses using the publicly available ipapi REST API. Then, the Bytewax dataflow writes the location data that is obtained into the output Kafka topic, partitioned by country. The following diagram shows a rough architecture of the data enrichment system: 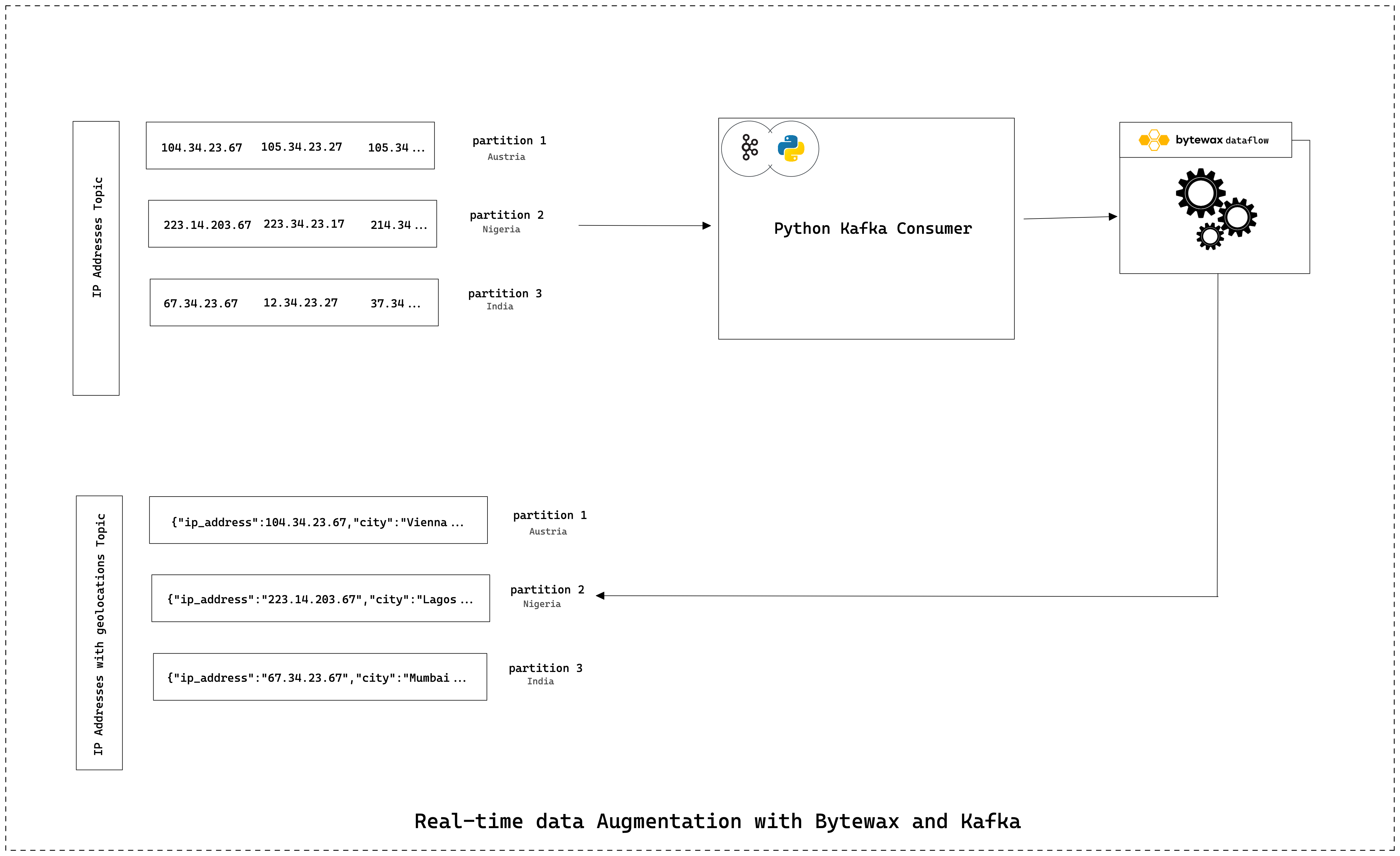 Before you begin, you’ll need the following:

Clone the starter code repo and navigate into it using the command below:

The starter code is a project that uses a simple requirements.txt file for dependency management. We recommend using a virtual environment manager to create a fresh python environment. Copy and paste the command below in a shell to install the requirements:

If the above installation is unsuccessful, make sure you have a clean environment and that the dependencies are not conflicting with each other.

Apache Kafka provides the data source and sink that this dataflow works with. The docker-compose file in the project contains set up instructions for starting the Kafka broker and Zookeeper. Navigate to the kafka directory and run the command below to start the Kafka Docker container in detached mode:

You should get an output showing that two containers are running (Zookeeper and broker):

Setting Up the Apache Kafka Topics

The dataflow used here has two topics of concern:

1. An input topic: “ip_addresses_by_countries”, that will store IP addresses partitioned by their country of origin.

2. An output topic: “ip_addresses_by_location”, that will store JSON location data obtained from the IP addresses in the input topic. This output topic is also partitioned by the country of origin of the IP address. The JSON data contains city, state, or region, and country key value pairs.

Each topic has twenty partitions and will be created using Kafka-Python. The topic creation and data population commands are scripted in the src/initializer.py Python script. Run the command below to create both topics and populate the input topic:

How the Dataflow is Structured

The dataflow has a single step that performs the data enrichment using an IP address as input.

Every Bytewax dataflow begins from a dataflow instance, flow = Dataflow(). A dataflow has some mechanism for input and output. In the following code snippet, we use the KafkaInputConfig for the input and an output builder to write back to a Kafka topic:

The capture operator on the dataflow instance calls the function returned by the output builder. However, before the capture method runs, all intermediate functions that are passed to map, filter, and reduce operations are run. The previous dataflow has a single map operation that takes an IP address as input and returns the location data based on that IP address in JSON format. The code for this is defined in the get_location function.

The KafkaInputConfig is an input mechanism that will listen to the configured topic and pass the returned data in the format (key, payload) to the next step in the dataflow. In this case it will be (country, ip_address). We pass the kafka broker address, the group_id, topic_name and the number of messages to batch. In this case, we are going to batch each event individually.

In the following code, the output_builder returns the function send_to_kafka that takes in the JSON output from the get_location function call. Then, it writes it to the output Kafka topic ip_addresses_by_location.

You can think of a Bytewax dataflow as a pipeline that takes in one input item from a source, transforms it, and sends it to a sink.

You can run the dataflow as a normal Python script using the following command:

If throughput is a concern because of the added API request latency. You could also increase the parallelism across workers or processes to match the number of topics that were initially created.

This command will source data from the input topic, enrich the data, and write the result to the output topic. Then, you can investigate the output topic using the following command:

Please note: Your output could look slightly different because some HTTP requests were completed before others.

In this article, you learned about data enrichment and its use cases and how you can map your IP data from server logs to geolocations for further understanding and analysis.

Found that article helpful? Share it!
Star us on Github
Star
Join our Slack community!

Any questions? Join our community!

Other posts you may find interesting

As we all know, the real world is never perfect and as a consequence of that imperfection, we often end...
Read more
Lucien Chemaly
07/06/2022

Real-time data is largely used to support real-time analytics, which is the process of transforming raw data into insights as...
Read more